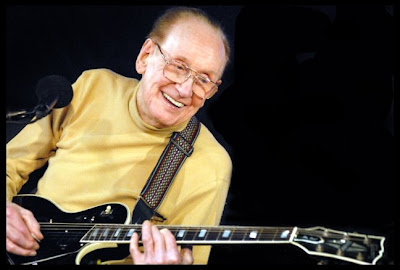 “It’s not technique — it’s what you have to say.

I got the mumps. They threw me in a crib so I wouldn’t roll out onto the floor. And there’s a big bay window in my house, and that window stayed perfectly still until that train started to chug. At a certain speed, I could reach up and feel the pane, and that glass pane would vibrate. I said, Doggone, there’s got to be a reason for this. So I go to the kindergarten teacher, and she takes me to the science teacher, and the science teacher takes me to the library and reads it off to me — “This is called resonance.” That was the beginning.

The audience, they’re not professionals. They just love music. It isn’t necessary to play over their heads to be admired.

You can’t go to the store and buy a good ear and rhythm.

I got out of the car and there was a knife in my neck. The guy says, “Don’t move.” And the drummer got out of the car, and he got a gun in his head. This was my entrance to the South Side of Chicago. But it was necessary, because I wanted to play jazz.

Last time I saw Count Basie, he was in a wheelchair. They wheeled him up onto the stage, he sits down at the piano, and he gives the downbeat, and that band played like they were in heaven. And right in the middle, the band cuts. He had to take one hand and put the other on it, and he comes down with one note. And it was the greatest note I ever heard in my life.

I gave up the guitar in 1965. Didn’t want to see a guitar. I’d go out and get drunk. When I came out of the heart surgery, the doc said, “Promise me you’ll work hard.” I said, “I thought working hard is what got me here.” He said, “No, working is what will keep you alive.”

There are times when you want to go where you used to go and you can’t go there. So I’m back to Count Basie lifting his hand. And I find you can stop that show with one note just like you can with a hundred.