Epiphone kicks off the summer by introducing four spectacular new guitars for NAMM 2016. This June, Epiphone will present the Inspired by “1966” Century Archtop, the Les Paul Special VE™, the Les Paul Traditional PRO-II™, and the Ltd. Ed. Inspired by “1955” Les Paul Custom™ Outfit.

The NAMM show has been an annual tradition for Epiphone since 1919, and over the decades the House of Stathopoulo has never failed to make a big impression whether it was introducing electric instruments in 1939, ES-style models like the Casino in the early ’60s, or last year’s unveiling of the Ltd. Ed. Joe Bonamassa Les Paul Standard w/Bigsby®. For Summer NAMM 2016 held in Nashville, Epiphone has lots of surprises in store. Check it out! 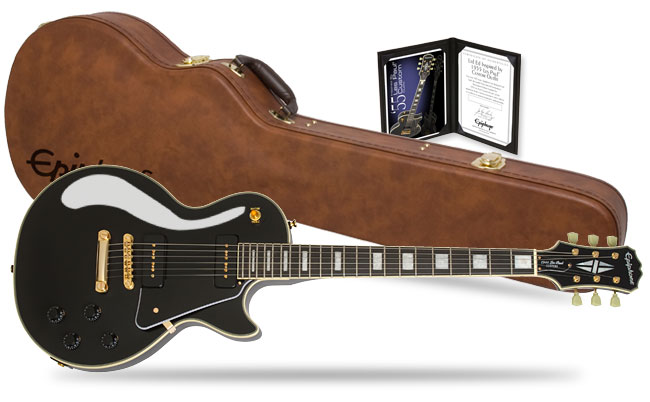 The new Epiphone Ltd. Ed. Inspired by “1955” Les Paul Custom™ Outfit is a historic reissue of the “tuxedo” Les Paul that Les designed to be the most beautiful electric guitar ever made. Les’ original Les Paul Custom featured a striking Ebony finish and gold hardware that would not only look great with a “tux” but was designed to convince skeptics that the new–and controversial–“solid body” electric guitar was a refined and classy instrument. Epiphone’s long friendship with Mr. Les Paul began in the 1940s and throughout his life, Les continued to work closely with Epiphone reviewing new products and offering suggestions. “They are damn fine instruments, I swear by them!” said Les.

The new Ltd. Ed. Inspired by “1955” Les Paul Custom™ Outfit has the same profile of 50s era Les Paul Customs with a Mahogany body in an Aged Gloss Ebony finish. The Ltd. Ed. Inspired by “1955” Les Paul Custom™ Outfit is powered by Gibson USA Soapbar P-90 pickups with gold pole screws. P-90 pickups are recognized as the most powerful and versatile single-coil pickups ever made and were Les’ favorite style of pickup for his personal Les Pauls. The “1955” Les Paul Custom Outfit comes with Epiphone’s Heavy-Duty Non-Rotating 1/4″ output jack with a Square Jack Plate, a gold LockTone™ Tune-o-matic bridge and Stopbar tailpiece, and gold Epiphone “Deluxe” machine heads with an 18:1 turning ratio. A vintage style hard case and certificate of authenticity are included. Visit the product page for more info.

The Inspired by “1966” Century is a faithful reissue of the classic thinline all-hollowbody archtop prized by collectors for its comfortable, lightweight body and warm, woody tone. The “1966” Century is powered by the new Epiphone P-90 PRO™, an extremely sensitive pickup that easily bends to a player’s unique touch. Featuring 18% Nickel Silver covers with new bobbins manufactured to historic dimensions, Elektrisola magnet wire, sand cast Alnico V magnets, and pole shoes manufactured with the period-correct alloy. The P-90 style pickup is recognized around the world as the most versatile and expressive single coil pickup available. And just like the originals, Epiphone P-90 PROs™ have tin plated brass base plates like those used on 50s and 60s era Gibson P-90 pickups. The “1966” Century Archtop also features Wilkinson® Vintage 3-in-a-row machine heads and is set up at the factory with D’Addario strings. Available in Cherry and Vintage Sunburst Aged Gloss Finish.

The new Les Paul Traditional PRO-II has the classic build and profile of a traditional Les Paul with a solid Mahogany body and a traditional carved top. The Les Paul Traditional PRO-II™ is powered by Epiphone’s most popular humbuckers featuring newly tooled, USA-style bobbins. In the neck position is an Alnico Classic PRO™ with Alnico-II magnets with open zebra coils for a warm, thick vintage tone. In the lead position is an Epiphone ProBucker™-3, inspired by Gibson’s BurstBucker™-3 humbucker, and features unevenly wound coils and Alnico-II magnets to replicate the tone of “Patent Applied For” humbuckers found in priceless vintage 50s era Les Pauls. Controls use “TopHat” Volume and Tone knobs which have push/pull potentiometers allowing you to coil-split each pickup for single-coil sounds. Plus, now you can also pull up on the bridge pickup’s tone knob for an additional 15db Boost! The active Boost control is powered by a 9-volt battery which is easily accessible at the back of body. The Les Paul Traditional PRO-II™ comes with legendary Grover® machine heads with an 18:1 tuning ratio, a traditional cream colored pickguard, solid nickel LockTone™ Tune-O-Matic bridge and Stopbar tailpiece, and Epiphone StrapLocks. An optional case is also available. New color finishes include Ebony, Desertburst, Ocean Blue, Vintage Sunburst, and Wine Red.