Following on the success of the Les Paul Studio ’50s Tribute guitars from last year, Gibson is rolling out the ’60s Tribute version, featuring the slimmer ’60s style neck. These are great, USA-made, vibey guitars for not a lot of dough.  We’re talking $849.99 with gig bag (lefty is $1,049.99).  Oh yeah, and Goldtop is an option! Follow the jump for more pics and information!

A Nashville Tune-o-matic bridge, stopbar tailpiece and Kluson-style tuners keep it all rock-solid and resonant and its gnarly P-90 tone stays true to the Les Paul style. All guitars come protected in a black Gibson gigbag and include a Gibson owner’s manual. Check one out today at your authorized Gibson dealer, and get a chunk of that fast and furious ’60s mojo in your hands.
Body and Finish
A solid, carved maple top and chambered mahogany body give the Les Paul Studio ’60s Tribute the same tonewood combination that has been helping Les Pauls rock for nearly 60 years. Five authentic vintage-style finishes—Worn Gold Top, Worn Honey Burst, Worn Heritage Cherry Sunburst, Worn Ebony or Worn White—present a guitar with the look of a well played original, while the instrument’s unbound body and neck keep it in line with the popular Les Paul Studio line. 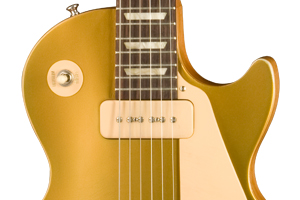 Neck and Headstock
The Les Paul Studio ’60s Tribute is crafted with a solid quarter-sawn mahogany neck with fast SlimTaper™ profile, an unbound rosewood fingerboard, and a headstock set at the traditional 17-degree angle for superior transference of vibrational energy—all ingredients of the classic Les Paul Standard of 1960. 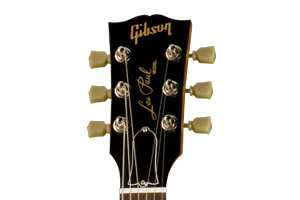 Pickups and Electronics
To give it the vintage look and meaty, raw sound that this rock ’n’ roller deserves, the Les Paul Studio ’60s Tribute carries two Gibson USA P-90 pickups, which are wired through the traditional four-knob Les Paul control array, with a three-way Switchcraft toggle selector. 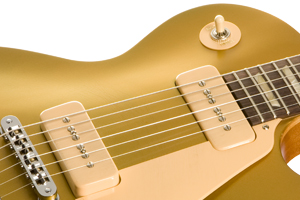 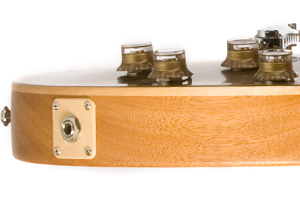 Species
The body of each Les Paul Studio ’60s Tribute is crafted from chambered mahogany, joined to a solid carved maple top with ultra-strong Franklin Titebond 50 glue. These classic tonewoods have yielded some of the most legendary sounds in the history of rock. 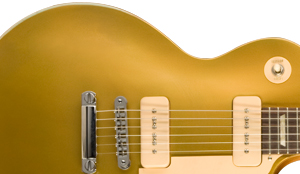 Tonal Characteristics
Mahogany is a medium-dense wood with excellent resonance and superior sustain, and it offers a rich, round, warm tone, but with plenty of high-end sheen and good midrange presence. Add a solid maple top, and the guitar’s tone is enhanced with added clarity, sustain and definition. The body’s chambering also enhances its mellow acoustic resonance, and adds further air to the midrange content.
Design
The Les Paul Studio ’60s Tribute follows the classic lines of the Les Paul Standard, with a gently arched top and a single cutaway on the treble side of the neck/body joint for improved upper-fret access. The body’s back is routed with a number of chambers which serve to both reduce overall weight, and to enhance the guitar’s resonance.
Average Weight
The average weight of a Les Paul Studio ’60s Tribute body is 5.13 lbs, which is in the normal range for a Gibson guitar.
Available Finishes
The Les Paul Studio ’60s Tribute is finished your choice of Worn Gold, Worn Honey Burst, Worn Heritage Cherry, Worn White or Worn Ebony.
Worn Honey Burst (Also available Left-handed)
Worn Cherry Burst
Worn Gold Top (Also available Left-handed)
Worn Ebony (Also available Left-handed)
Worn White
Surface Texture
A grain-textured satin finish with 30-sheen lacquer gives the Les Paul Studio ’60s Tribute a pre-worn look that enhances its vintage image, and offers a smooth, comfortable playing feel.
Process
The Les Paul Studio ’60s Tribute is hand-finished in nitrocellulose in a process that is carefully monitored to ensure minimum build-up, in an effort to produce a finish that breathes with the guitar and enhances natural resonance, and the final coat is hand-rubbed with a flattening agent to enhance its aged appearance. Unlike many other manufacturers, who settle for a polyurethane finish, Gibson opts for a nitrocellulose finish that will encourage the natural vibration of the instrument for a purer tone. In addition, a nitro finish is very porous and actually gets thinner over time. 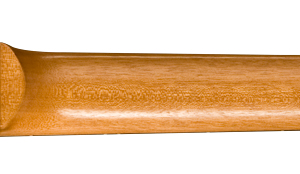 Neck Profile
The neck on the Les Paul Studio ’60s Tribute is carved to Gibson’s fast yet extremely comfortable SlimTaper™ profile. This neck shape has been a favorite with many players since its arrival on the Les Paul in 1960. 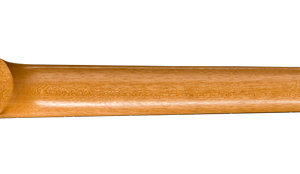 Tonal Characteristics
Rosewood fingerboards are known for their rich, round tone. Ebony is a very popular up-market fingerboard material, known for its strong, clear tone. Tolerance
When fitting the neck and body together, we take advantage of our precise measuring equipment so that all angles, pitches and alignments maintain a tolerance within .005 of an inch. Not only does this help to keep your guitar in tune but it also maintains proper string alignment relative to the fingerboard.
Joint
Gibson uses what is known as the Mortis & Tenon joint to bind neck to body so that the two pieces form one solid unit. This time-tested technique has been used for millennia in all the great woodworking arts—from shipbuilding to cabinetry—to create one solid wood unit from two separate sections, and has been proven to yield a stronger neck and body than if the instrument was made from a single piece of wood. 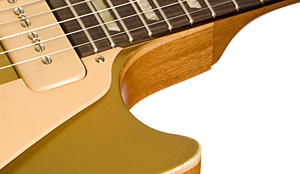 Headstock Angle
The Les Paul Studio ’60s Tribute headstock is carefully angled at Gibson’s traditional 17 degrees, which increases pressure on the strings and helps them stay in the nut slots. An increase in string pressure also means there is no loss of string vibration between the nut and the tuners, which equals better sustain.

Truss Rod
Gibson’s traditional truss rod, found in most all of our guitars, is highly responsive to the individual adjustments you’ll want to make to personalize and optimize string action and sustain. 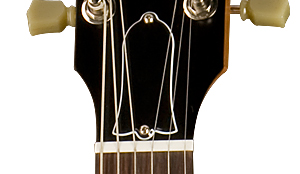 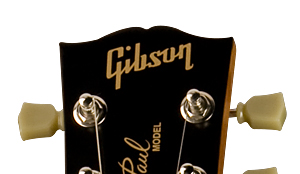 Adhesive
The adhesive used to join neck and body is Franklin Titebond 50, one of the strongest glues on the market today. Average Weight
The average weight of the neck is .98 lbs.
Joint Angle
5° (+/- 15 seconds)
Fingerboard Species
The neck of the Les Paul Studio ’60s Tribute carries a rosewood fingerboard, the traditional fingerboard of the original Les Paul Standard. Rosewood is both hardwearing and sonically superlative, adding sweetness and depth to the guitar’s overall sound. In keeping with the Studio series, the fingerboard remains unbound, a look and feel that also echoes the great Les Paul Special and Junior model guitars of the ’60s. 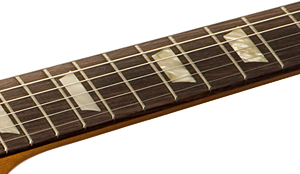 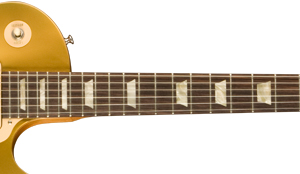 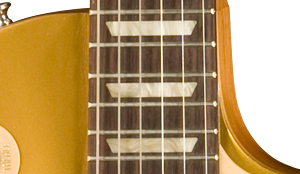 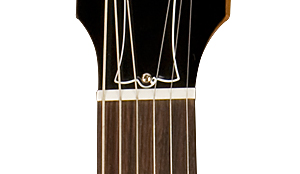 Tuning Keys
The headstock of the Les Paul Studio ’60s Tribute is equipped with vintage Kluson-style tuners with green tulip buttons. These tuners provide a classic look in line with the model’s lineage, and smooth, robust performance. 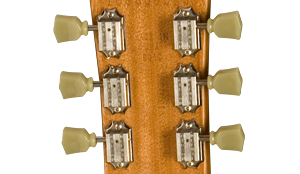 Trussrod Cover
As with most Gibson guitars, the truss rod cover on the Les Paul Studio ’60s Tribute is made from black and white vinyl plastic, and is shaped like an antique bell 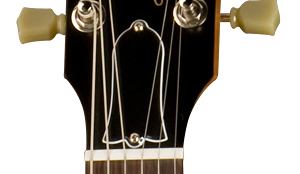 Strap Buttons
The Les Paul Studio ’60s Tribute’s aluminum strap buttons are the same style and design that Gibson has used since the early 1950s. 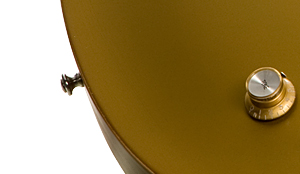 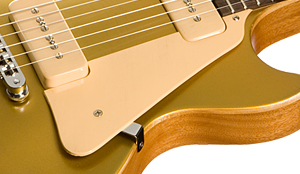 Bridge
In 1954, Gibson revolutionized guitar hardware when it debuted the Tune-o-matic bridge, setting a standard for simplicity and functionality that has never been bettered. Included on the Les Paul Studio ’60s Tribute, the Nashville Tune-o-matic provides a firm seating for the strings, allowing the player to adjust and fine-tune the intonation and string height in a matter of minutes. It also yields excellent coupling between strings and body, maximizing resonance, tone, and sustain. This bridge is made from Zamak then plated with chrome, and each one weighs approximately .118 lbs. 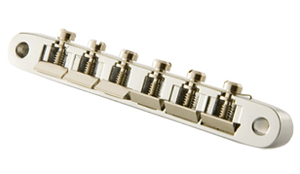 Tailpiece
Every Tune-o-matic bridge is combined with a separate “stopbar” tailpiece, which is essentially a modified version of the earlier wraparound bridge that’s designed to further enhance the connection between the strings and the body. The Les Paul Studio ’60s Tribute’s stopbar tailpiece is made from Zamac then plated with chrome, and each one weighs approximately .24 lbs. 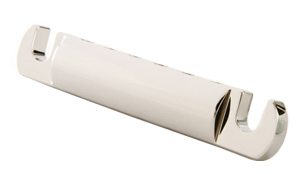 Control Knobs
The control knobs on the Les Paul Studio ’60s Tribute are Gibson’s gold Top-hat knobs with silver inserts, as found on many vintage and modern Gibson guitars. 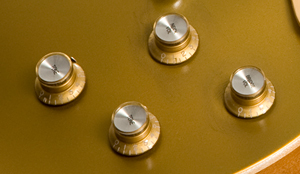 Pickups Model
The Les Paul Studio ’60s Tribute is equipped with a pair of Gibson’s P-90 single-coil pickups, as used on original Les Pauls from 1952-56, and on the first Les Paul reissue of 1968. Gibson USA’s P-90s are acclaimed as the finest reproductions of original 1950s P-90s available today. 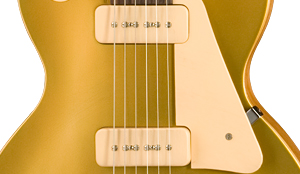 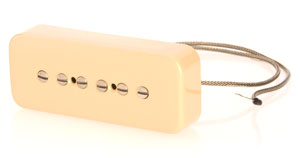 Tonal Characteristics
Although they are among Gibson’s oldest pickup designs, P-90s have retained devoted followers for more than 60 years. These single-coil pickups have about the same output power as vintage PAF humbucking pickups, with a little more punching power in the midrange, added high-end bite, and a raw, slightly grainy voice overall that makes them perfect for rock and roll, blues, roots-rock, and countless other styles of music.


Volume Controls
The Les Paul Studio ’60s Tribute uses an individual volume control for each pickup, which consists of a quality 300k linear potentiometer for a smooth, natural volume roll-off. 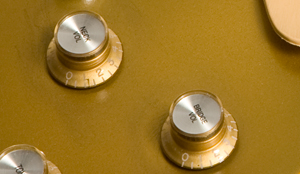 Tone Controls
The Les Paul Studio ’60s Tribute features individual tone controls for each pickup. The pots have ohm readings of 500k and are non-linear. 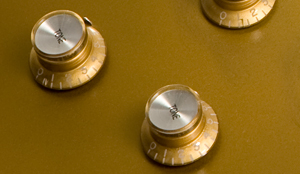 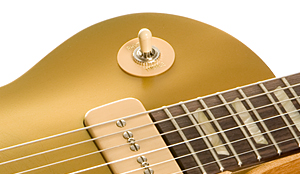 Output Jack
The guitar features a 1/4” output jack made by Switchcraft. Its super heavy duty construction holds your guitar cable securely in place. 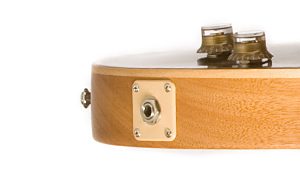 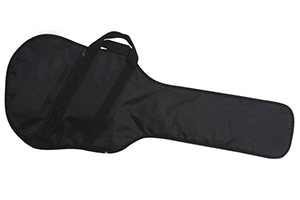